The growth and survival of Troutlodge production fish were evaluated after transfer to seawater. The fish were triplodized progeny of the November strain and were transferred at four different weights (100g, 150g, 250g, and 300g) to circular rearing tanks at NOAA’s Manchester Research Station. Transfers began in September 2018 and ended in January 2019. Fish transferred at 150g and larger had significantly higher survival (87% to 99+%) than the 100g group (38%). The majority of the mortalities occurred within 7 days post-transfer and were primarily of fish at the lower end of the size range at transfer. Although the project was not designed to evaluate optimal fish growth, the results indicated that the November strain has the capacity for good growth and feed conversion in seawater.

Although Troutlodge supplies a limited number of eggs destined for seawater production, the potential for rainbow trout production in seawater is increasing. For the industry to grow, however, baseline data to formulate best practices for industry are necessary. Among the most critical bottlenecks for successfully producing rainbow trout in seawater is the transition from the freshwater to seawater environment. Key criteria to evaluate successful adaptation to seawater include both survival and growth. Fish that are poorly adapted after transfer (maladaptation) may continue to survive but demonstrate poor growth, low condition factor, reappearance of parr marks compared with successfully transitioned peers.

Rainbow trout undergo the process of smoltification in which they become prepared for transition from fresh to seawater. The process has been well studied, resulting in a thorough understanding of factors affecting readiness for seawater entry. Photoperiod, physiological changes characterizing smoltification, genetic background, the salinity of receiving water, and fish size all influence the success of seawater adaptation.

Timing seawater entry to coincide with smoltification optimizes opportunity for successful growth and survival in seawater. Smoltification and osmoregulatory capacity are closely linked to fish size among other things. The specific objective of this project was to evaluate survival and early growth of fish transferred to the marine environment at different mean weights to determine the effects of seawater entry size on subsequent adaptation and whether fish size might override the normal controlling effects of photoperiod.

Of the four genetic strains maintained by Troutlodge, the February and November spawning strains are most likely to have originated from anadromous steelhead and thus, show good potential for seawater production. To avoid sexual maturation prior to harvest and prevent potential genetic mixing of escaped commercial stocks with wild counterparts, sterile triploid fish are recommended for seawater production. For these reasons, triploid progeny of the November 2017 Troutlodge strain were used in this study.

To observe how size at seawater entry affects early growth and survival, a group of November 2017 YC triploid fish was split into four cohorts. Each cohort was introduced to seawater at a different mean weight-- 100, 150, 250, and 300g average weights, respectively. Each cohort consisted of approximately 500 fish and occupied a single 12-foot diameter circular tank at NOAA’s Manchester Research Station. Pumped seawater from Puget Sound was supplied to each tank. Fish were exposed to ambient light conditions.

Figure 1 shows a timeline of activities associated with the project. Cohort 1 was transferred in September 2018, followed by Cohort 2 in October 2018, Cohort 3 in December 2018, and finally Cohort 4 in January 2019.

Figure 1. Timeline of activities showing date of vaccination, transfer dates for each of the four cohorts, and sample dates.

Successful adaptation to seawater is defined by both survival as well as growth. Fish that demonstrate poor adaptation may die soon after transfer or linger and exhibit poor growth and condition (maladaptation).

The experimental groups showed little evidence of maladaptation (Table 1)—fish either survived and grew or died almost immediately post-transfer. The incidence of maladapted fish averaged slightly more than 1% for all four cohorts at the final inventory.

Unlike maladaptation, there were significant differences in survival among the four cohorts (Figures 2 ans 3). Cohort 1 experienced very high mortalities (52.5% of the transferees) within 7 days after transfer indicating very poor adaptation to seawater. Although the target size at transfer was a minimum of 100g, individual mortality data indicated that the majority of the mortaliities were between 50-75g. The remaining three cohorts exhibited high to very high survivals by the end of the project, ranging from 87.0% (Cohort 2) to 93.4% (Cohort 3) to a high of 99+% (Cohort 4). In almost every case, mortalities were at or below the average weight of their respective cohort transfer size. As the data indicates, survival in seawater was directly correlated with size at transfer.

Figure 2. Cumulative morality % for each cohort.

Figure 3. Mortality for each cohort during the first 30 days and to the end of the project.

Although the purpose of this project was primarily to determine the relationship between seawater entry weight and initial survival, growth was also of interest as an indicator of adaptation since maladapted fish do not thrive after seawater exposure. Of particular interest were the effects of a declining photoperiod and declining seawater temperature profile on the capacity of the November Troutlodge strain to grow in seawater. Due to the limits of the experimental design (hand feeding once per day, 5 days of the week), we did not attempt to define the maximum growth profiles of the different cohorts. Rather, the primary goal was to determine whether each group continued to grow after transfer.

Each cohort was sampled by randomly collecting 50 individual fish per cohort, monthly or twice monthly, and determining weights and lengths. At the final data collection, each tank was inventoried by hand. Growth profiles for each cohort from transfer to project termination are shown in Figure 4.

Figure 4. Seawater growth curve for each cohort and temperature profile.

Each of the four cohorts showed significant weight gains during the project duration despite the declining photoperiod and rearing temperature. Cohort 1 had the highest average daily weight gain and thermal growth coefficient, and the lowest feed conversion ratio (Table 2).

Two factors may have contributed to that difference: 1) Cohort 1 at the time of transfer may have been comprised of the fastest growing segment of the population in freshwater because of the grading process used to obtain the 100g transfer weight, and 2) The density in Cohort 1’s tank was the lowest of the four cohorts (Table 3) because of the high initial mortalities for that group.

This project demonstrated that Troutlodge’s November strain definitely has the capacity to survive and grow in seawater and that seawater adaptation is correlated with fish size. Furthermore, size at entry ameliorated the negative effects of seasonal declining photoperiod and temperature. Although the precise relationship between size at entry and optimal growth and survival have yet to be determined, the results of this project indicated that November strain triploid progeny will survive if transferred at 100g or greater and that larger sizes would probably lead to higher survival. This experiment did not conclusively determine the lower size limit for successful seawater transfer for the November Troutlodge strain although there was evidence that fish less than 75g would not adapt well to seawater when transferred in the fall months.

NOAA’s Manchester Research Station provides an ideal platform for smoltification research. We recommend that further testing and evaluation of the seawater adaptability for the other Troutlodge genetic strains, particularly the February and May strains, be conducted at the station whenever feasible. We also encourage family evaluations of fresh- vs seawater rearing to determine the extent of genotype-environment interactions and the need, if any, to specifically select for seawater rearing. We further recommend that growth and survival trials be conducted with industry partners to evaluate performance under production conditions. 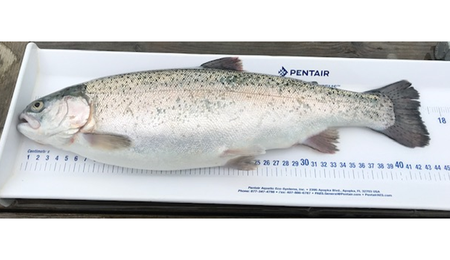 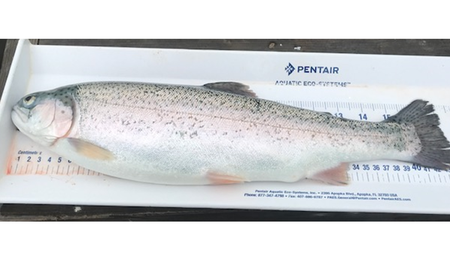 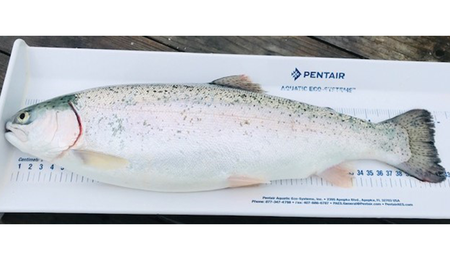 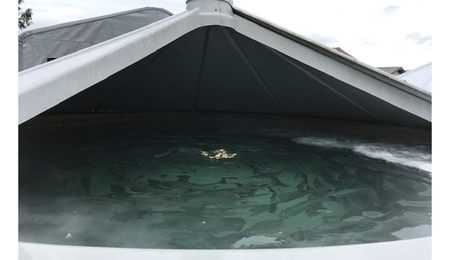 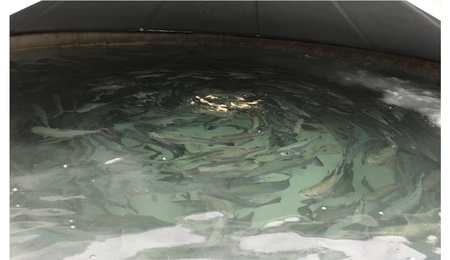 Growing up fishing and spending time out on the water with her family, Brittany Pearson, Logistics Specialist at Troutlodge never imagined a career in aquaculture but naturally, it’s been a great fit…

Next level of trout breeding

Troutlodge has been a leader in the industry for a long time but the application of genomics has allowed us to advance our breeding programs even further towards the next level of trout breeding. Wit…

Troutlodge partners with trout egg distributors, trout producers, veterinarians, feed companies, universities and influential organizations all over the world. Within the past 75 years, Troutlodge ha…